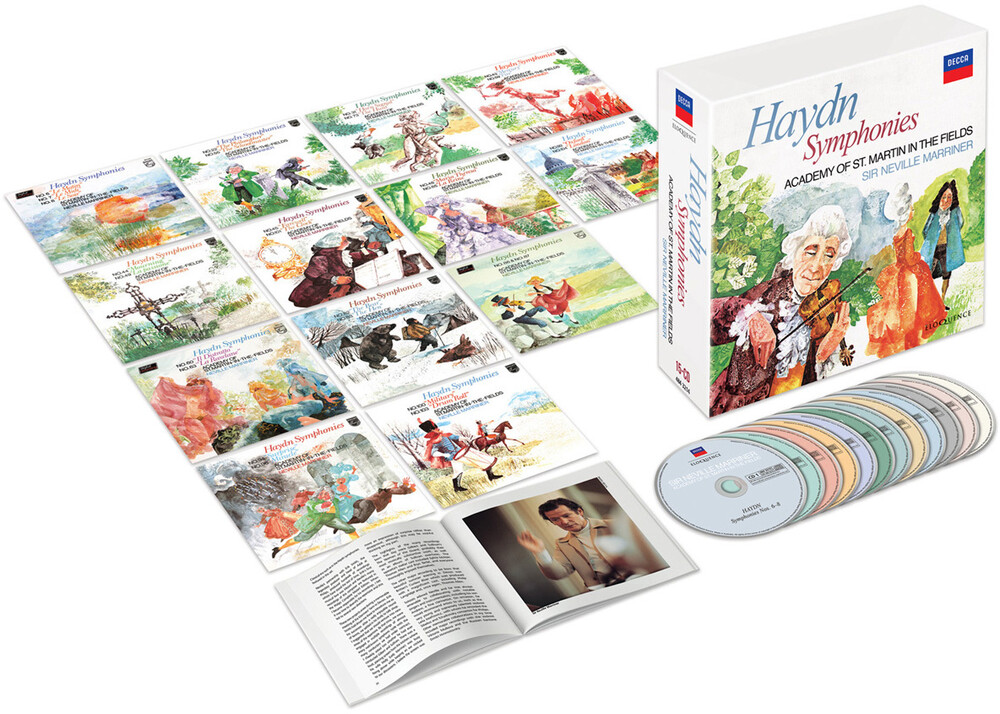 With the delightful original LP cover illustrations, this 'original jackets' presentation collects together for the first time the 33 Haydn Symphonies recorded by Sir Neville Marriner and the Academy of St. Martin in the Fields over a twenty-year period, from 1970-1990. Both the Polish and refinement of these performances, as well as the recording quality "of exceptional vividness and presence" (Gramophone), received widespread critical acclaim. Begun in 1970 with an album of Symphonies Nos 52 & 53, this series of Haydn recordings soon concentrated on symphonies with nicknames (none of them supplied by the composer). They attracted widespread praise for the precision of their playing, the excellence of the Philips engineering and the unassuming Polish and refinement of the readings, the only complaint being made that Marriner and his ensemble could not venture into all those other symphonic marvels which happened not to have attracted a nickname. Only towards the end of the series, in 1981, did they yield to this criticism by completing a set of the Paris symphonies with beautifully pointed accounts of Nos. 84, 86 and 87. However, with 33 individual symphonies eventually recorded, the series covers a substantial fraction of Haydn's legacy. Marriner took a flexible attitude to thorny academic issues such as whether or not to use a harpsichord continuo: 'The most important thing is to be practical, ' he said, and the series conveys a meeting of minds across the centuries between two supremely practical musicians. Some of these recordings last saw the light of day in a 1996 box of the 'named' symphonies. However, the present compilation restores the original couplings with 'original jacket' artwork. The booklet includes many session photographs of Marriner and the Academy in their natural habitat, as well as an enticing array of editorial contributions: from Max Harrison on Haydn's inexhaustible invention as a symphonist, from Philip Stuart on the ins and outs of the ASMF Haydn discography, from Rob Cowan on Sir Neville Marriner as a director of unfailing style and vitality in this repertoire, and a personal memoir from Costa Pilavachi who worked with Marriner in his capacity as A&R manager and later head of the Philips Classics label.