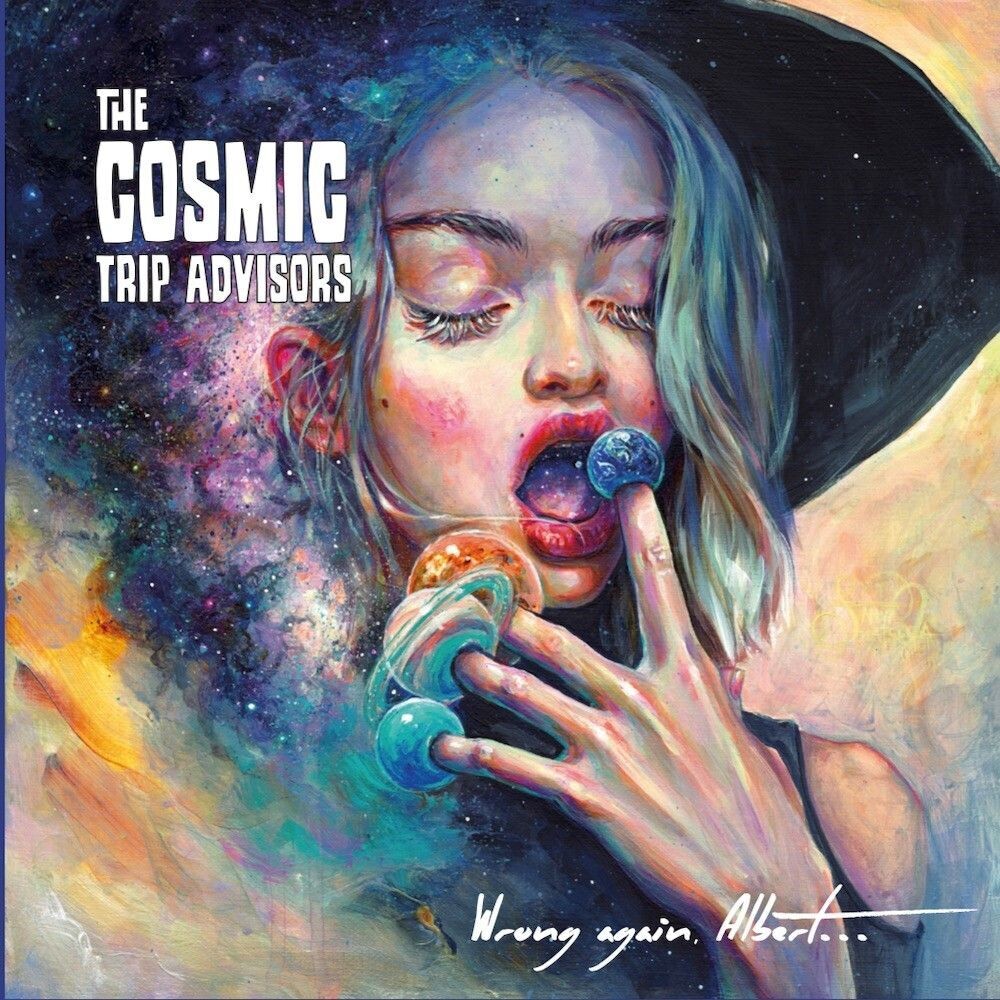 LIMITED EDITION COLLECTOR 2CDs - 'Wrong Again, Albert... ' is the quirkily titled debut record from West Lothian 6-piece Cosmic Trip Advisors. The Cosmic Trip Advisors are a rock 'n' roll band with a heart of soul. Rock 'n' Soul, if you will. In their world, Iggy can rub shoulders with Keef, Dolly can pinch Jimi on the arse & Macca can launch a goober at Rotten while Gram hums his approval from underneath a dusty old cactus... it's all good in the gumbo soup. The basic tracks were recorded live over a two-day period at Spinroad Studios in Sweden. Overdubs were added at Bad Cat Studios in Scotland. It was produced by Brit Award winner, Pedro Ferreira (The Darkness) and mastered by Ade Emsley at Table Of Tone Mastering ;The band all have similarly off-beat names: Lesbomb (vocals), El Cap (guitars), Tattie (guitars), The P-Man (keys), Mr Herringbone (bass), Pete The Beat (drums). Their true identities are since known : Lesley McGonnal, Mark Thornburn, Ian Tait, Peter Hampton, Herringbone & Peter Forrest. The opening track, Oh My My My! Batters in with some bonesaw-guitar riffage and thumping bass & drums. The sound is fleshed out by smooth organ sounds and the scene is set nicely for vocalist Lesbomb's entrance - and what a voice she has! Reminiscent of New York Queen Of Rock & Roll Sari Schorr in her grit and range - with a touch of Joanne Shaw Taylor's smoky tones in there as well - she owns the track and the whole album with a forceful performance. With the lead vocals continuing to astonish, the band's secret weapon is quickly revealed as the keyboard work of The P-Man. While both guitarists and the rhythm section all deliver great work throughout, The P-Man is the wild card and he brings something to the band's sound that few groups have these days. This digipack edition has a bonus CD with no 2nd takes, no overdubs or sneaky cheats. This is what Wrong Again, Albert... would have sounded like if it was recorded in one hour with six months more rehearsal, a new bass player (Chris Fulton) and a spring in our step. The icing on the cake is Lesley's incediary vocal performance throughout. If you loved her singing on "Wrong again, Albert... ", just wait until you hear what she's pulled out the bag this time. This is our debut album's unintentionally saucy little sister. #you know, the dirty one you wish you'd met first. In short... it's same, same, but oh, so very different. To recap! Unusual band name, unusual band member names, strong album artworks, full booklet with pictures and lyrics, eleven catchy tracks brewed from a slick mix of blues, rock and psychedelia with some standout instrumental performances and a real star turn from the lead vocalist. And a second twin CD, but not so twin.