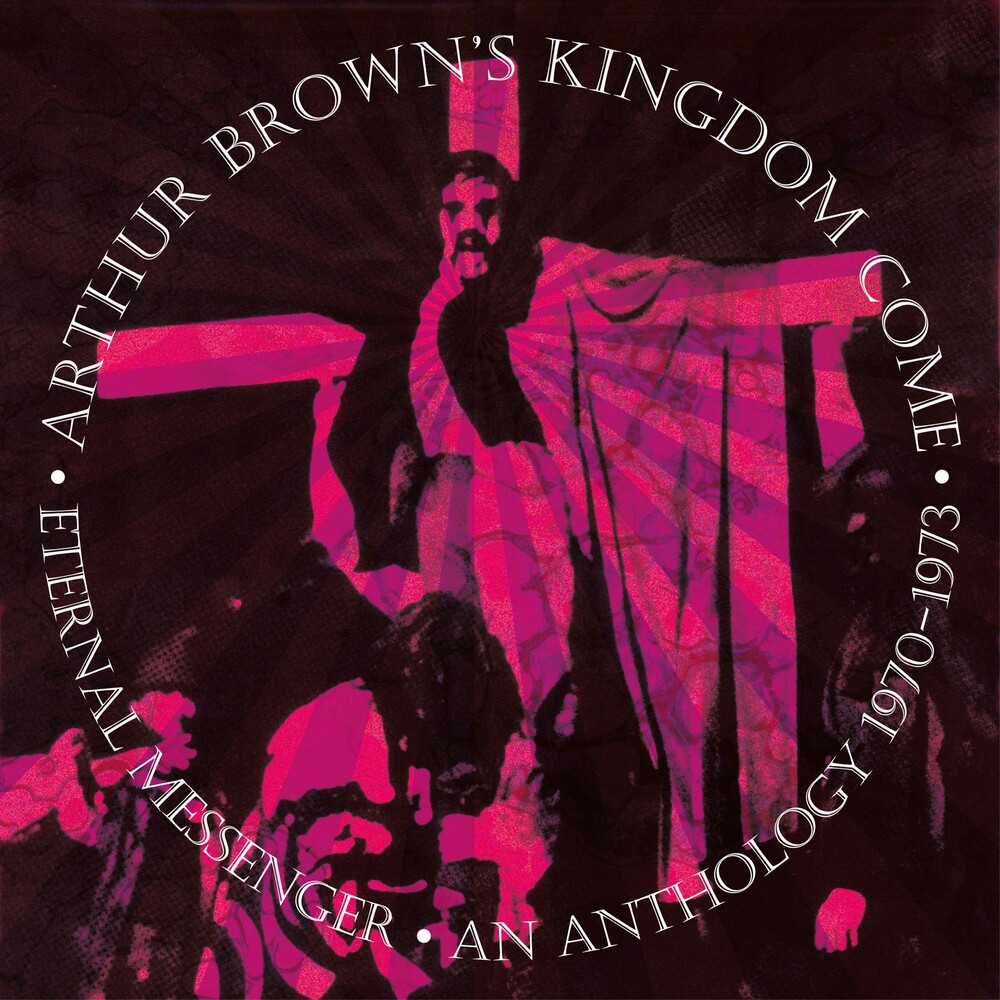 Esoteric Recordings is pleased to announce the release of a new boxed set featuring all of the albums recorded by the legendary ARTHUR BROWN & KINGDOM COME issued between October 1971 and April 1973. The band came together in 1970 following ARTHUR BROWN's failed attempt to form a new band upon the disillusion of The Crazy World of Arthur Brown in 1969. Based in rural Dorset, Arthur had undertaken rudimentary recordings with the bands The Puddletown Express and Rustic Hinge before forming a new, more satisfactory band KINGDOM COME. The initial group came together with a line-up of ARTHUR BROWN (vocals), BOB ELLWOOD (guitars), DAVE AMBROSE (bass), ROB TAIT (drums) and PETE BAILEY (percussion) to record a lengthy jam session in the studio. This tape was impressive enough to lead to a contract with Polydor Records and the album GALACTIC ZOO DOSSIER was the first album by the band. Issued in October 1971, the album featured Arthur Brown joined by ANDY DALBY (lead guitar / vocals), MICHAEL "GOODGE" HARRIS (keyboards), DESMOND FISHER (bass), JULIAN BROWN (VCS3 Synthesiser) and MARTIN STEER (drums). The band's debut album was a conceptual work loosely based upon the subject of humanity living in a zoo and subject to cosmic forces. As a group, Kingdom Come took the mantle from where the Crazy World of Arthur Brown had left off, presenting a highly theatrical show which utilised the VCS 3 synthesiser and presented a form of experimental rock music which was far ahead of it's time. This led to them becoming a popular act on the festival circuit (their memorable appearance at the 1971 Glastonbury Fayre was captured in the documentary film of the same name). For the band's next album, 1972's KINGDOM COME, Desmond Fisher departed and was replaced by PHIL SHUTT. The album was another conceptual work and built upon the impact of their debut. Soon after the album's release Martin Steer and Goodge Harris also departed the band. American musician VICTOR PERAINO joined the group on Mellotron, VCS3 and Theramin and Brown opted to utilise the Bentley Rhythm Ace drum machine instead of a drummer, bringing a new electronic direction to Kingdom Come's highly inventive Space Rock. This incarnation of the band recorded their final and finest album in the Autumn of 1972, the highly influential JOURNEY. Issued in April 1973 the album was a superb conceptual work and featured such legendary material as "TIME CAPTIVES", "SPIRIT OF JOY" and "COME ALIVE". Despite the excellence of the album, KINGDOM COME disbanded soon after the album's release leaving an impressive legacy. This new remastered boxed set features the albums "GALACTIC ZOO DOSSIER", "KINGDOM COME" and "JOURNEY", along with the archive disc "JAM - THE FIRST SESSIONS 1970" and "AT THE BBC 1971-1972" a twelve track CD featuring sessions recorded for the BBC between March 1971 and September 1972, nine tracks of which are previously unreleased. The set also adds thirteen bonus tracks (two previously unreleased on CD) taken from studio out-takes and a rare single. Also included is an illustrated booklet with new essay featuring an exclusive interview with Arthur Brown and a replica poster. "ETERNAL MESSENGER" is a fine tribute to Arthur Brown, a unique and visionary musician.