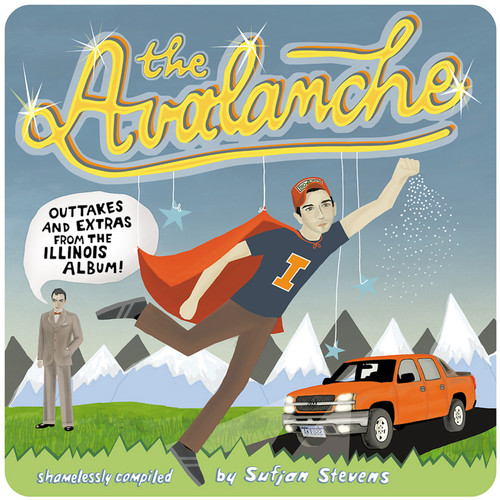 DISC: 1
1. The Avalanche
2. Dear Mr. Supercomputer
3. Adlai Stevenson
4. The Vivian Girls Are Visited in the Night By Saint Dargarius and His Squadron of Benevolent Butterfl
5. Chicago (Acoustic Version)
6. The Henney Buggy Band
7. Saul Bellow
8. Carlyle Lake
9. Springfield, or Bobby Got a Shadfly Caught in His Hair 1
10. The Mistress Witch from McClure (Or, the Mind That Knows Itself) 1
11. Kaskaskia River 1
12. Chicago (Adult Contemporary Easy Listening Version) 1
13. Inaugural Pop Music for Jane Margaret Byrne 1
14. No Man's Land 1
15. The Palm Sunday Tornado Hits Crystal Lake 1
16. The Pick-Up 1
17. The Perpetual Self, or "What Would Saul Alinsky Do?" 1
18. For Clyde Tombaugh 1
19. Chicago (Multiple Personality Disorder Version) 2
20. Pittsfield 2
21. The Undivided Self (For Eppie and Popo)

Released in 2006 as a follow-up to Sufjan Stevens’ 2005 Illinois, Asthmatic Kitty Records is finally releasing Avalanche on vinyl on August 31st, 2018. Initially conceived as part of a double album version of Illinois, Avalancheinstead became a “companion” (a polite word for “b-sides”) to Illinois. Since its release, fans have had mixed reactions. “3 versions of Chicago?!?! Enough already,” wrote ‘biografiend” on Sputnik. But “cravenmonket,” who gave the album 4.5 stars on rateyourmusic, suggests that we all “stop thinking of The Avalanche as more Illinois. It actually owes more to Michigan.” Cravenmonket may be right. Take “The Mistress Witch” or “Saul Bellow,” both of which could have lived on the 2003 Michigan as much as on Illinois. One can hear Sufjan’s 2004 Enjoy Your Rabbit in “The Undivided Self.” And the band jam on “Springfield” looks forward to 2010’s All Delighted People. Then there’s “Pittsfield,” which, at least lyrically, foreshadows the more personal themes of 2015’s Carrie & Lowell. All that to say, a vinyl release of Avalanche is long overdue. With gratitude, we happily present Avalanche as a 2xLP a mere twelve years after its release, complete with all 21 songs from the original release, including the three versions of “Chicago” (you’re welcome, biografiend). THANK YOU!