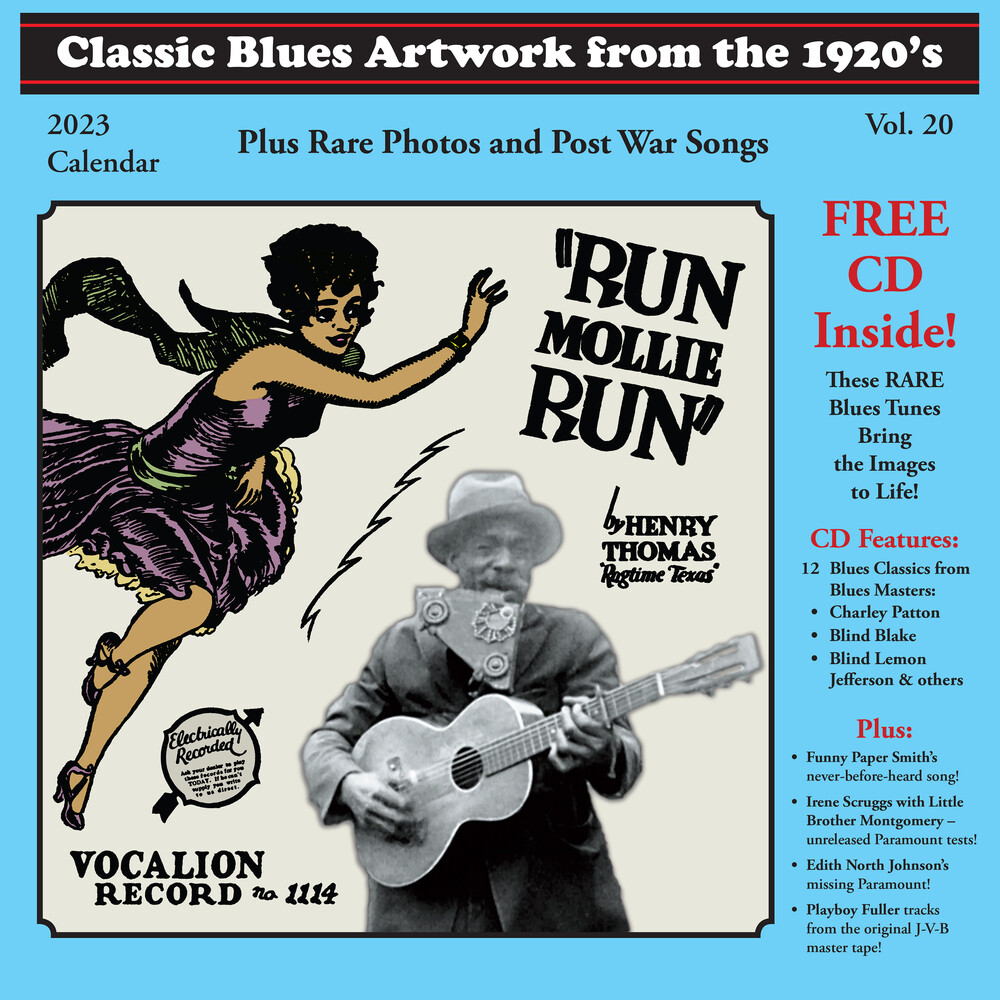 (12 month calendar with free CD) Our 2023 "Classic Blues Artwork from the 1920's" calendar with free CD has broad appeal to anyone interested in Blues music or history. Within it's pages is a huge treasure trove of original Blues advertising artwork from the earliest days of recorded Blues history as well as photographs of Blues singers, both Pre-War and Post War. In addition, the calendar contains a free CD whose songs cleverly match up to the ad or artist featured for the month. This year's CD has a total of 25 Classic Blues Songs from the 1920's - 1950's CD Vol. 20. It is time for Blues Images to say goodbye. After twenty years, the "Classic Blues Artwork from the 1920's" calendar with free CD is their final volume due to rising printing, production and postage costs, as well as a world where many no longer use wall calendars nor appreciate CD quality sound. This year's edition is a treasure trove of original advertising artwork for Pre-War Blues 78's (including six color images) and rare photographs of Pre-War Blues artists. The enclosed free CD of rare Pre-War and Post War recordings is perhaps their best ever with a whopping 25 tracks! The Pre-War offerings include: a never-before-heard song by Funny Paper Smith, the first version of the Blues standard "Ain't Gonna Worry My Life Any More" by Memphis Willie Borum, two unreleased takes from a 1930 Paramount session with Irene Scruggs and Little Brother Montgomery (the latter's very first recordings), and both sides of Edith North Johnson's missing Paramount! Also featured are astounding Post War Blues, such as Pete Franklin's "Mr. Charlie," and four songs by Playboy Fuller from the original J-V-B master tape. All are lovingly restored as close to perfection as today's technology provides. They're going out with a bang! This unique combination of calendar and CD cleverly matches the songs with each month's ad or artist - bringing the images to life! Also included are full-color CD booklets and tray liners for calendar buyers to insert into their own jewel case.