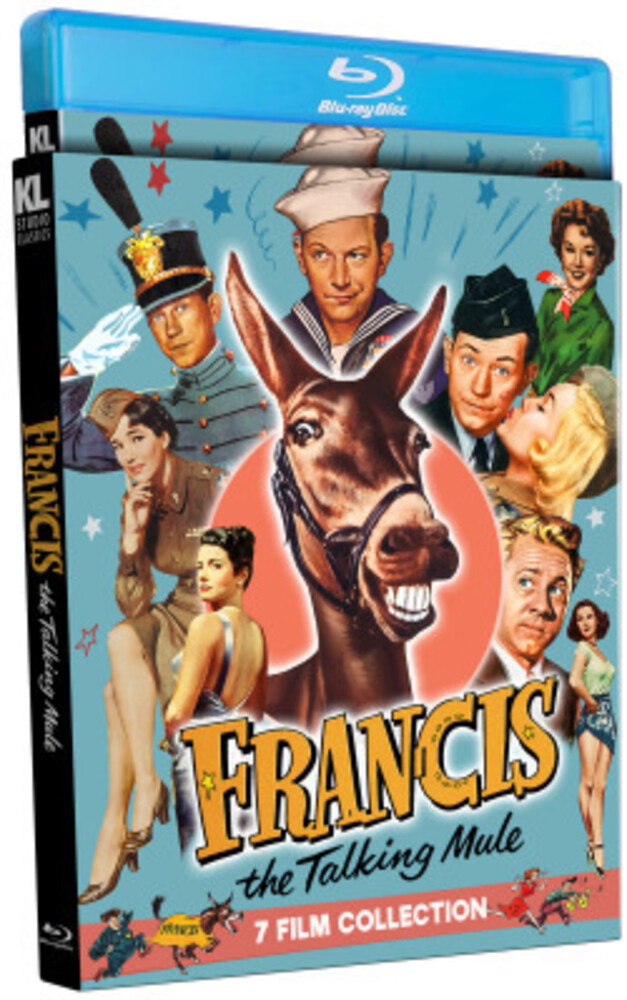 On a mission in World War II, G. I. Peter Stirling (Donald O'Connor) is rescued by "Francis the Talking Mule"(1950), that's right, an Army mule who can talk... but only to him. Stirling's claim that his four-legged pal speaks lands him in a padded cell before the pair are recognized for their heroic deeds. Debut entry in the popular series co-stars Patricia Medina, with Chill Wills supplying Francis' voice. The ranch where Francis the talking mule (voiced by Chill Wills) resides is in trouble, so the loquacious creature goes to work, helping a race horse get it's confidence back in "Francis Goes to the Races" (1951). With Donald O'Connor, Piper Laurie. Next, after Pete (O'Connor) is given an appointment to a military academy, he brings along his four-legged pal in "Francis Goes to West Point" (1952). And, when Pete sets his sights on becoming a reporter, it's up to his big-eared buddy to come up with some hot scoops in "Francis Covers the Big Town" (1953). Francis tags along when pal Pete gets pressed back into service, and has a horselaugh when he's erroneously assigned to an all-women's base, in "Francis Joins the WACS" (1954). Julia Adams, Mamie Van Doren co-star. Peter (O'Connor) has to set sail for Coronado when Francis is about to be sold as surplus in "Francis in the Navy" (1955). Martha Hyer, Jim Backus co-star. In the final series entry, Francis gets a new human sidekick (Mickey Rooney), a new voice (Paul Frees), and some spooky murders to solve, in "Francis in the Haunted House" (1956). Virginia Welles, David Janssen co-star. 10 hrs. Total. Standard and Widescreen; Soundtrack: English; Subtitles: English; audio commentary; theatrical trailers.