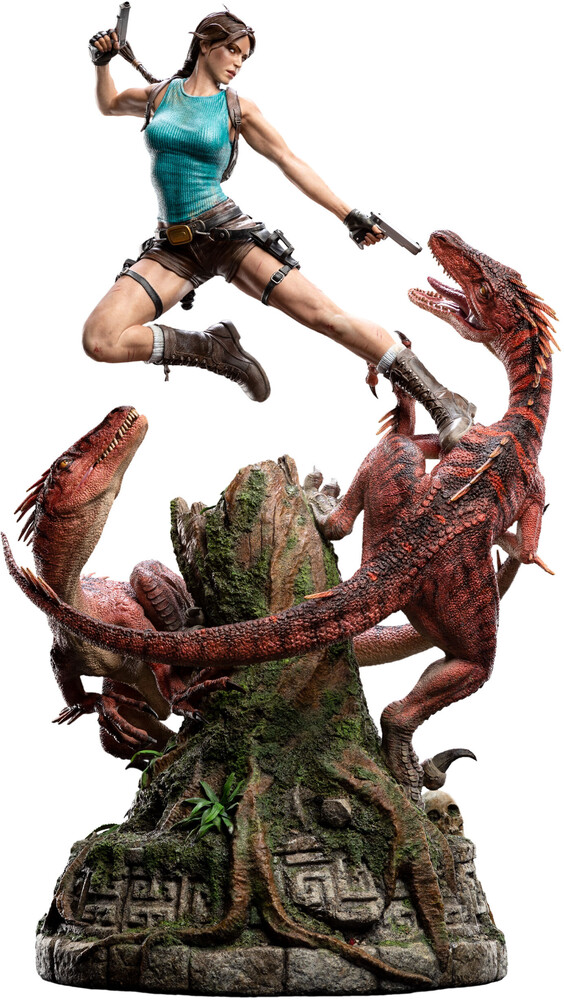 "In the original 2007 anniversary game, Lara Croft is represented as a simplified version of the heroine we know her as today. Weta Workshop 3D artist, Gary Hunt, was charged with re-interpreting the original 3D game model from Crystal Dynamics - adding realism and expression through detailed design. Paying homage to the 25th anniversary of Lara Croft, she is depicted here in a dynamic pose, which captures the physical and emotional tension of her iconic fight against dinosaurs in The Lost Valley. "

While running through the Lost Valley one must be swifter than a raptor, and mightier than the tyrant lizard king.

"During her voyage through the Lost City of Vilcabamba, Lara found herself in a valley teeming with danger; calmness and cunning had never been so critical. With her trusty dual pistols and aerobatic flair, Lara perfected the ability to attack whilst on the go. Of course, no one leaves the valley completely unscathed. Our latest sculpt of Lady Croft captures all the details of her dangerous adventure, including every last cut and bruise."

"Capturing a split second of action is always a challenge, and Lara fighting the raptors was just that. Creating believable poses in such a confined space needed a thoughtful composition, so I looked to classical renaissance statues for inspiration."

Please note: This product was designed and prototyped at Weta Workshop. Images are of a pre-production prototype. Each piece is painted by hand and slight variations will occur.